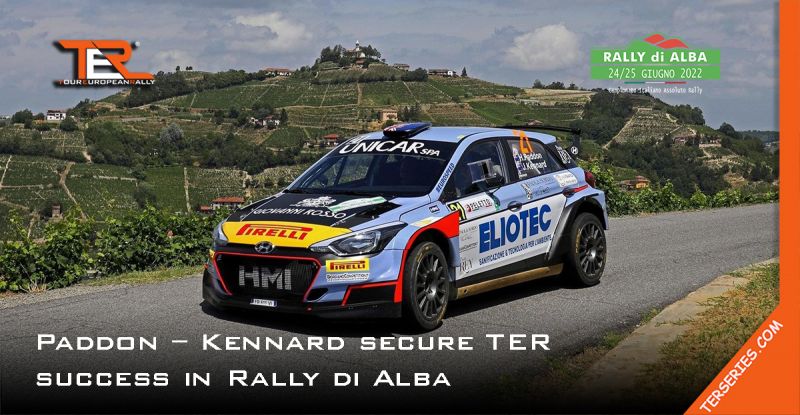 Lefebvre and Andreucci take the other podium steps after two intense days.

TER Ambassador Hayden Paddon, codriven by John Kennard on a Hyundai i20, kicked off his European season in style winning Rally di Alba, fourth round of the 2022 TER – Tour European Rally. Paddon led from start to finish, setting six consecutive fastest times in the first stages. The Hyundai New Zealand driver, former Hyundai Motorsport WRC works driver and winner of 2016 WRC Rally Argentina made the most of the variable conditions, on the challenging stages of the Langhe Roero Monferrato hills, UNESCO World Heritage site.

2014 WRC3 and JWRC World Champion Stéphane Lefebvre, with Andy Malfoy on a Citroën C3 Rally2, took second place after a two-day long fight against 12-time Italian Champion Paolo Andreucci and Rudy Briani, driving a Škoda Fabia Rally 2. The two crews traded places and seconds in a close combat, where the greatest gap between them was only 3 seconds after SS 7, in which they were joint fastest. Lefebvre made a small break in the penultimate stage, on dirtier conditions, to double his advantage before securing the result on the final test, with Andreucci taking bronze.

Outside the podium, 2-time Swiss Champion Ivan Ballinari, codriven for the first time by Elena Giovenale on a Vw Polo, climbed into fourth place after stage 6. The pair lost precious seconds in the following test due to a puncture, but managed to keep their rivals at bay.

Jonathan Michellod and Stéphane Fellay’s Škoda Fabia Rally 2, with which they had been in a close fight against Ballinari from the start, picked up a puncture on stage 6, dropping them from fourth down to seventh. They nevertheless go in the lead of the provisional TER – Tour European Rally classification.

In the TER Junior category second win of the season, and category leadership, for the 2021 NACAM Junior Champions, Mexican brothers Patrice and Nicolas Spitalier, who put their Renault Clio Rally 5 ahead of Yoann Loeffler - Mathieu Coppa’s sister car.

Close, but no cigar, for rallying novice Yohan Surroca: sharing a Peugeot 208 Rally 4 with Gilbert Balet, the young swiss had inherited the lead with three stages to go, but crashed on the penultimate test.

Rallye du Chablais TER Junior winners Sacha Althaus and Lisiane Zbinden retired in stage 7, when they were leading the category on their Renault Clio Rally 4.