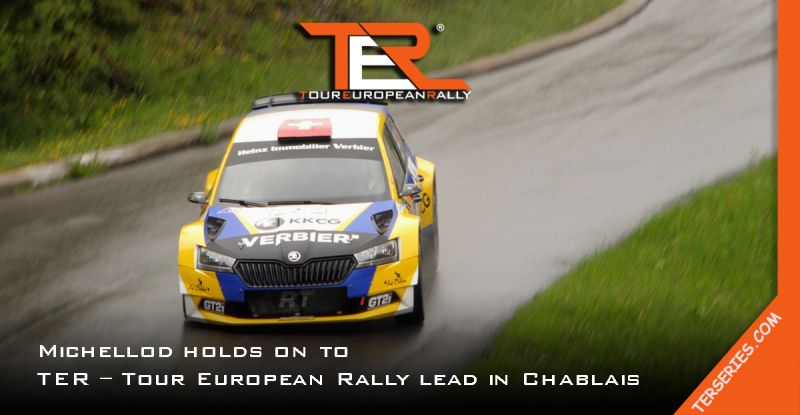 A great battle at the front with Carron, sharing stage wins and trading seconds..

Jonathan Michellod - Stéphane Fellay on a Škoda Fabia Rally 2 are the leaders of TER – Tour European Rally Round 3 at the end of day 1. After a great drive in the difficult morning conditions gave them the lead from the start, they fought against the experienced crew of Sébastien Carron and Lucien Revaz in another Fabia. The multiple event winners were fastest in stages 3 and 5 , and their gap from the top step of the podium after the opening day is of 13”2.

Ivan Ballinari and Marco Menchini, 2-time Swiss Champions are a solid third in their VW Polo, increasing step by step their pace and advantage over the Škoda Fabia of Cédric Althaus codriven by Gaëtan Lathion.

2021 Swiss Champion Mike Coppens, with Renaud Jamoul on a Citroën C3, struggled with the varying conditions but improved his pace in the afternoon and completed a tricky opening day in sixth place.

TER Juniors are also having a great sporting battle. The 2021 category winners, Sacha Althaus - Lisiane Zbinden in a Renault Clio Rally 4, fifth overall overnight, have led from the start followed by the Renault Clio Rally 5 of Guillaume Girolamo and Benjamin Betrisey. Thibault Maret and Andy Malfoy’s Peugeot 208 Rally 4 lost, in the final stage, the second place that they had held since SS 2; they are on the provisional final podium step, with a 30” advantage over Yoan Loeffler, codriven by Gaëtan Aubry (Renault Clio Rally 5).

Maurice Brera and Pierre-Alain Forestier are comfortable in the TER 2WD category lead with their Peugeot 208 Rally 4.