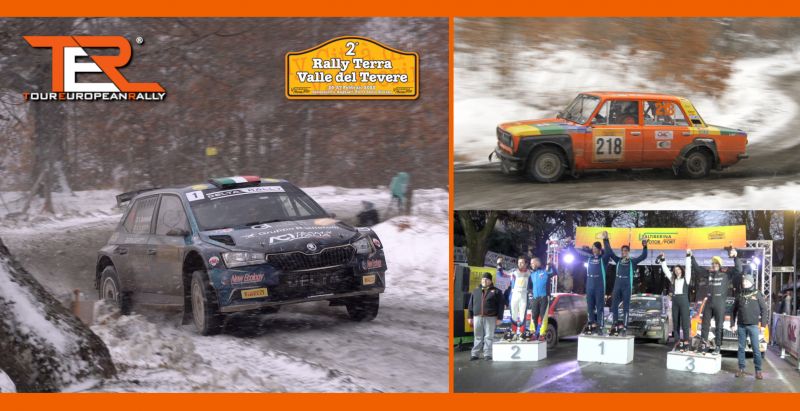 Alberto Battistolli, codriven by Simone Scattolin, secured the first win of the season by leading Rally Terra Valle del Tevere from start to finish, on the technical gravel stages around Sansepolcro, Anghiari and Pieve Santo Stefano.

With a Skoda Fabia R5, which gave him the win in the last round of the 2021 Italian Rally Championship, the venetian driver overcame challenging weather conditions, with snow on some sections, and avenged the evil luck which struck him last year in the maiden edition of the event.

The Fabias proved to be a favourite, trusting the first six places of the standings.

Alessandro Bettega and Paolo Cargnelutti finished second, while Francesco Fanari and Cristina Caldart fought back, after cutting a chicane cost them a 30” penalty, to snatch the final podium place in the final stage, and only by 0.1”, from Simone Romagna and Francesco Pinelli.

The French crew of Jean-Philippe Quilichini with Fabrice Gordon lost a podium place when they dropped nearly a minute due to a puncture in the penultimate stage, ending in sixth.

Andrea Maselli and Alessio Angeli brought their Hyundai i20 NG R5 hoem in seventh, ahead of three more Fabias: Angelo Pucci Grossi codriven by Francesco Cardinali made the most of his first experience on gravel and with R5 machinery; Gianmarco Donetto and Marco Menchini lost a couple of places when cutting a chicane resulted in a penalty, with last year’s winners Nicolò Marchioro and Marco Marchetti closing the top ten after struggling with set-up issues and losing time for going off the road.

In the opening round of the TER Historic, Hungarians "Mésziati" and Bernadett Gerencsèr took their Lada Vaz 21011 to victory ahead of the Ford Escort of Germano Bollini codriven by Matteo Roggia.

Rally Terra Valle del Tevere also counted as the third round of the Raceday Ronde Terra Series. Alessandro Bettega with Paolo Cargnelutti took the spoils amongst the drivers registered for the series, ahead of Francesco Fanari codriven by Cristina Caldart with third place going to Simone Romagna and Francesco Pinelli, who now lead the series with one round to go.

The 2022 TER – Tour European Rally season has finally begun, stay tuned for more surprises and news from the newest concept of Rally series.