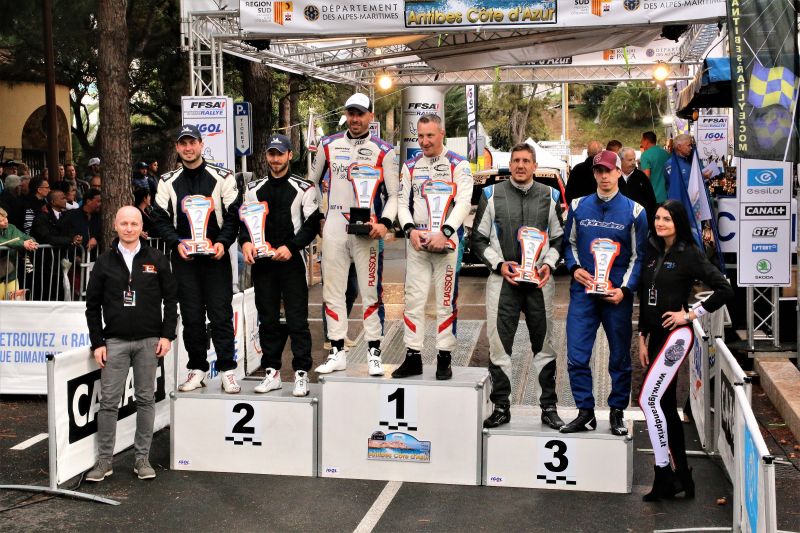 Sylvain MICHEL, co-piloted by Jérôme DEGOUT on Skoda Fabia R5, won the opening round of the 2019 TER - Tour European Rally joining the final podium in Juan-les Pins. The French driver occupied the second place in the TER until the start of the ultimate Special Stage of the French Riviera event. After the last stage, he found himself at the head of the series, due to the retirement of the leader's car.

Having confortably managed to stay first position since the start, Yoann BONATO and Benjamin BOULLOUD on Citroën C3 R5 retired in the last stage after a big bump of against a rock.
The weather conditions in the Nice hinterland were very tricky, with road parts under the fog and heavy rainfalls, low visibility imposed the competitors great caution.
Bruno RIBERI and Florian HAUT-LABOURDETTE came back in second position, very satisfied with the race weekend where he had to carefully manage his tire choices.
Romain HAUT-LABOURDETTE and Fabien TARDITO complete the podium in third position.
A solid 4th place for Steve FERNANDES and Olivier BECK. The luxemburg driver, managed this position even with the unespected sudden rain and an unfortunate tyre choise on his Skoda Fabia R5 the first morning.
Starting their the third year of TER, germans Stefan GOTTIG and Natalie-Solbach Schimidt take the fifth place in TER classification

In the TER 2 CUP, the under 26 junior category, swiss Jonathan MICHELLOD codriven by the french Stéphane FELLAY on a Peugeot 208VTi R2 precede Allison VIANO and Pascale MACARIO LAZARO on Ford Fiesta R2J.
Swiss Sascha ALTHAUS was forced to retire due to a mechanical issue on the first day.

2018 TER vice champions, belgian Joachim Wagemans and Francois Geerland, retired in the second Special Stage on day one. The belgian crew made a small mistake, touching the wall with their Peugeot 208 T16 R5 and causing irreparable damages. Also USA Ace Robey and Alex Gelsomino suffered from a crash in the same special stage. An uforseen wather puddle caused their Tour European Rally debut to restart on the second day under Super Rally regulation.

The TER 2 WD trophy is won by the Romanian crew Alexandru FILIP and Bogdan IANCU on a Renault Clio RS R3T. German driver Norman Kreuter left the race during the second leg.