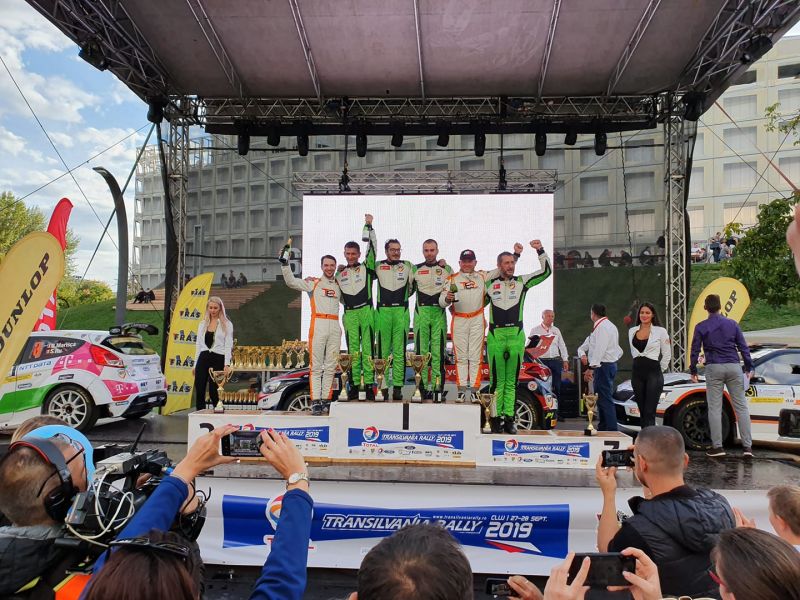 The 2016 first winner of the TER and 2015, 2016, 2018 Romanian Rally Champion, Simone Tempestini, codriven by Sergiu Itu on Hyundai I20 R5, win the 5th round of the 2019 TER - Tour European Rally and the Transilvania Rally. The crew managed the racing two days with a masterful hand leaving no chance to their direct pursuers on the dry routes of the Romanian event finishing this one by performing 7 scratches time including the Tour European Rally Power Stage.

Taking advantage of an error by the Romanian crew, Sebastian Barbu and Bogdan Iancu on Skoda Fabia R5, the Belgians Joachim Wagemans and François Geerlandt after an exceptional performance during the two days of rally on romanian roads are on the third step of the TER – Tour European Rally podium and Transilvania Rally.

Joachim Wagemans and François Geerlandt were driving for the first time in a brand new car for them, the Skoda Fabia R5 in the TER official livery.

There is still one rally to run in the TER - Tour European Rally before the endof the 2019 season and everything is still possible for the final victory in the overall standings for competitors entered in the TER, the International Rally du Valais which will take place from next October 17th to 19th

Other series opened for the final victory, the TER 2WD TROPHY,  and after retirement of the German, Norman and Michaela Kreuter on Citroën DS3 R3T Max. Romanian Alexandru Filip and Mihaela Dobranici on Renault Clio join Cluj Napoca leading the series. They precede another Romanian crew, Doru Ioan Mihut and Radu Guramulta on a Peugeot 208 R2, the Hungarian crew Zsolt Gyuriczki codriven by Levente Boroczi with their Citroën C2 R2 Max and Romanian Eugen Caragui and Robert Patrick Fus on Peugeot 208 R2.

Today, retirement after accident for the Hungarian crew, Viktor Vitek and Laslo Holecz on Citroën C2 R2 Max, Romanian Cristian Dolofan codriven by Mihai Sandu on Peugeot 208 R5, German Norman and Michaela Kreuter on roll over before the arrival of the S.S 6, without damage for the crew.