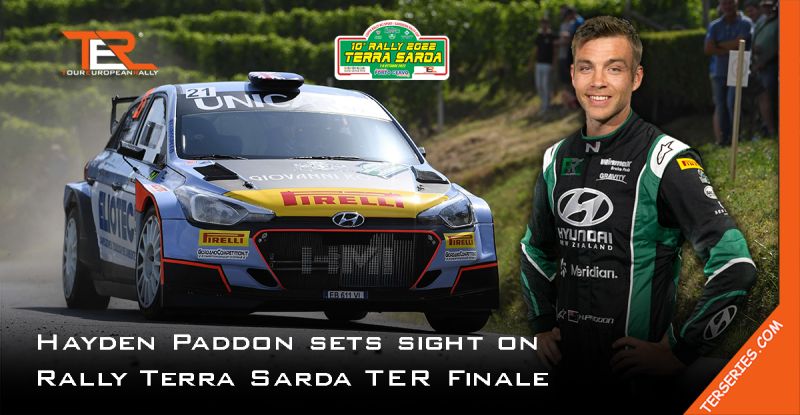 Things often happen in sets of three, and New Zealand’s former Hyundai Motorsport WRC works driver, winner of 2016 WRC Rally Argentina, Hayden Paddon is hoping there will be truth in the saying as he targets a third consecutive season win in the 2022 TER – Tour European Rally, codriven by young Jared Hudson with whom he shared overall victory in the fifth round.

After success in Rally di Alba, and a great maiden tarmac win at Get Connected Rali Ceredigion in Wales, the Hyundai i20 driver lies second in the provisional standings, only three points behind 2-time Swiss Champion Ivan Ballinari.

The ultimate duel for the 2022 title in the newest concept of Rally series will take place on 7-9 October, over some great tarmac stages: the Gallura Region in the north of Sardinia, the beautiful mediterranean island, will be the ideal backdrop for sporting action. Porto Cervo, one of the jewels in the Costa Smeralda tourism area crown, will host the finish of the Rally and the TER Series 2022 Season Prizegiving Gala on Sunday evening.

Hayden Paddon said: “Returning to Sardegna is a little like returning to an old home. I spent some years in Sardegna and love the island and the very friendly people. Obviously we normally do the gravel rally there, but looking forward to experiencing the tarmac stages in a stunning backdrop. A perfect conclusion to the TER series, a series we have really enjoyed being part of this year and hope we can see it grow from strength to strength in the future”

Luca Grilli (TER Organiser and Promoter) said: “All the TER staff is delighted and proud to have Hayden and Jared with us once again. As TER Ambassador, Hayden is working with us and helping the Series to grow. I wish to express my gratitude and congratulate everybody at Porto Cervo Racing, they are working tirelessly to prepare an unforgettable event and ending to the TER Series 2022 season”

Mauro Atzei (President of Porto Cervo Racing - Rally Terra Sarda Organising Committee) said: “The participation in Rally Terra Sarda of Hayden Paddon, entered the week before in the WRC Rally in New Zealand, is a very precise sign of the importance and growth of our event at an international level, it confirms the validity of the bond established with the TER - Tour European Rally - which thanks to its great worldwide visibility and professionalism fully embraces the common goal of a project aimed at enhancing drivers, territories, the nations involved and the partners”