10 things not to miss 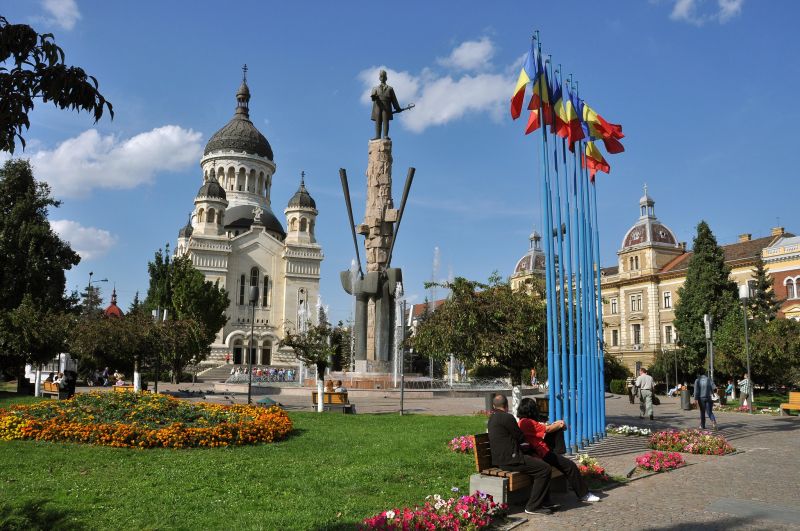 The Heart of Transylvania, a multicultural city full of diversity, Cluj-Napoca is the Romanian city with the largest urban cultural vitality, according to the Center for Consultancy and Research in Culture. A vibrant town with a lively nightlife, Cluj is known for a variety of events, from various fields, from film to music, from gastronomy to business. Festivals like TIFF, Untold, Electric Castle, Jazz in the Park received international recognition and became genuine Cluj brands.

Cluj-Napoca has become the city with the most developed sports infrastructure in this country. Cluj Arena Stadium hosted the Romanian national football team in the European Championship qualifiers. The Polyvalent Hall was home of the national women’s tennis team, in the Fed Cup match, the national handball team against Norway in the qualifying match for the European Handball Championship, the men's tennis match against Spain in the Davis Cup and many more. In 2017, besides Transilvania Rally, Cluj-Napoca will host two of the highest level sports competitions: the European Artistic Gymnastics Championship and the European Basketball Championship - Eurobasket 2017.

Unirii Square –  represented from the ancient times as the center of economic, spiritual and administrative district of the city, on the site, people carried on an intense daily life since Roman times and the Middle Ages. Union Square brings together some of the most important architectural assemblies in Transylvania, such as Gothic, Baroque and Neo-Baroque, the most relevant examples being The Roman Catholic Church Saint Michael, The Art Museum and The Pharmacy Museum, the statue of Matthias Corvinus, The Mirror Street and ancient palaces of nobility (sec. XV-XIX).

Museum Square  -  the oldest square of the city, it was transformed into a pedestrian area and it is richly represented by architectonic and religious assemblies by Gothic and Baroque architecture and Roman archaeological sites. Tourists can admire the Franciscan Church and Monastery, The Carolina Obelisk which is the first secular monument of the city, the National Museum of Transylvanian History and Matthias Corvinus House, which are some of the emblematic monuments of the city.

Avram Iancu Square  – Cluj's spiritual, administrative and judicial center is dominated by the Orthodox Metropolitan Cathedral and the buildings of the Romanian Opera and National Theatre, bordered by palaces built in neoclassical style in the early twentieth century (eg: Palace of Justice and Palace of Finance, Regional Railways and  Prefecture Cluj county).

The Bothanical Garden - founded in 1872, it is one of the first, largest and most complex in South-Eastern Europe, also considered a national museum and it covers an area of 14 ha. The main attractions are the Japanese Garden, the Roman Garden, also the tropical and equatorial greenhouse plants. Both the Herbarium and Botanical Museum are hosting over 11,000 plant species worldwide.

The Transylvanian Ethnographic Museum and Park - havegathered over the years tens of thousands of traditional civilization testimonies from the region, forming a vast documentary pool of popular Transylvanian culture. The Village Museum (the outdoor section) includes folk architecture monuments, households and crafts spaces, recreating the Transylvanian villages atmosphere of the XVII-XX centuries.

The Fortress Hill - located at 405 m altitude, it offers a superb panoramic view over the city. Built by the Austrians between 1715-1735, it has a Vauban fortification type, which used to house administrative buildings, garrison and armory. The Fortress Hill was a symbol of Habsburg control and served as a prison, especially during the Revolution of 1848.

The Tailor's Tower and The Reformed Church - Two monumental constructions were built with the help of King Matthias Corvinus, in the XVth century. The Tailor's Tower is part of the city's old rampart, which then stretched over an area of 14 hectares. In front of the tower is the statue of Baba Novac which was the general of Michael the Brave, and was impaled in 1601. The Reformed Church is one of the most colossal Gothic buildings in Transylvania, having a stronghold aspect. In front of the church you can find a bronze copy of Saint George's statue, one of the earliest and most famous sculptures from the Renaissance period, made in 1373 by two local artisans, the original being currently held in the Royal Palace in Prague.

Cluj-Napoca’s Central Park – Inaugurated for the public after 1830, it has landscaped paths, a lake and pavilion for music and a summer theater. At the end of the nineteenth century the old eclectic Casino edifice was build, nowadays being known as the Casino Urban Cultural Center. Recently, the park received a new dimension with the Cluj Arena Stadium and Polivalent Hall, some of the largest and most modern sports facilities in Romania, hosting numerous events.

The Paintbrush Factory - is a model for the conversion of an old industrial space from the communist period into a contemporary art center, providing a springboard for numerous internationally known artists like Adrian Ghenie. The Paintbrush Factory is actively contributing to Cluj-Napoca's recognition as an art city of the future (Huffington Post) and a creative industries hub.

Places to visit around Cluj-Napoca

Cluj and its surroundings provide a convenient taste of some of the greatest things that all the rest of Romania has to offer.   Come and try it all!   Float in the salty lakes – Cluj’s miniature versions of the Black Sea. Watch the newly hatched ducklings swimming around on the Somes River – Cluj’s local version of the Danube Delta. Visit a historic castle in Bontida. Hike through natural forests and explore caves in the nearby Turda Gorges.

Cojocna Baths. Less than 20km away from Cluj, Cojocna Salt Lakes are one of the favorite place to relax and cool off from the hot sun in the summer.   The two lakes are formed above former salt mines and the water is so salty that you can just lie in water and it will support your weight. Added to all that, the salty water is known to have therapeutic properties. There is also a sand beach for volleyball, badminton or even building sandcastles.

Baisoara Resort. In winter Baisoara is the best place to ski in Cluj because it is just 50km away, only one hour by car. Baisoara is the ideal place for outdoor sports. There are two ski slopes there. One is the Buscat ski slope that is at a higher altitude and offers beautiful views over the Carpathian Mountains.   The other is the Onix ski slope, where the snow is better maintained and is located next to the Onix Hotel.

In summer, the Baisoara Resort is a great place to start on hiking trips to visit the Scarisoara National Park with rare plants and impressive cliffs or to hike on top of the mountain to “Pietrele Marunte” (the little stones)   On a clear day you can see 7 chains of mountains and hills from this picturesque spot.

Banffy Castle in Bontida.   This Castle was called the Little Versailles before the Second World War because of its beautiful gardens and architecture. Lord Banffy was one of the Generals of the Hungarian armies in the war.  He sacrificed his 500 year old family castle in order to save the city of Cluj from being destroyed. After losing the city of Turda, Banffy decided not to move the battle’s front line to Cluj and instead retreated until Oradea so that Cluj would be saved from the destruction of war. The German troops, supposedly his allies, burned his castle when they were retreating from Russia as a form of disciplinary punishment.

Today the Banffy Castle is being rebuilt by volunteers from architectural faculties of Europe and funded by Transylvanian NGO’s, one of them being the NGO funded by Prince Charles of Great Britain. Through their efforts you can see the grandeur that the Castle once had to offer slowly reemerging from the ruins. Today there are different medieval events organized at the castle, such as period reenactments and sword battles between the Mediaeval Clubs from around the Country. It is worth a trip to spend a nice afternoon enjoying a medieval atmosphere.

Turda Gorges.   One of the locals’ favorite places for picnics and enjoying the great outdoors are the Turda Gorges. The area is a natural sanctuary, with an amazing landscape: abrupt cliffs, straight walls (appreciated by rock climbers), wild vegetation and caves. The path that leads between the big cliffs is easy accessible and very well maintained. Don’t forget to look up and admire the beauties that tower 80 meters above your head and the small waterfalls that are formed from them. The path that leads over the cliffs is especially recommended for hiking and adventure enthusiasts. The Turda Gorges, Cheile Turzii in Romanian, is 10Km away from the city of Turda.

Tarnita Lake. 20 km outside of Cluj are four water dams of fresh mountain water for Cluj. They were built between the mountains during the communist era, in order to produce electric energy and ease the water delivery for Cluj. This area is known for fishing and waterskiing in summer and for its picturesque autumn landscape when the red, brown, and yellow leaves reflect themselves in colorful images across the water. Tourists can visit the dam, take boat rides or enjoy the local fish cuisine in the surrounding restaurants.

Belis Lake: On the floor of the Belish Lake, a flooded village sits fully intact underneath the water.   During particularly hot summers when the water level is low, you can see the cross from the church tower piercing the surface and sticking up out of the lake to remind the world that it is still there. For an unusual experience diving clubs go and explore the underwater houses of the former village of Belis.