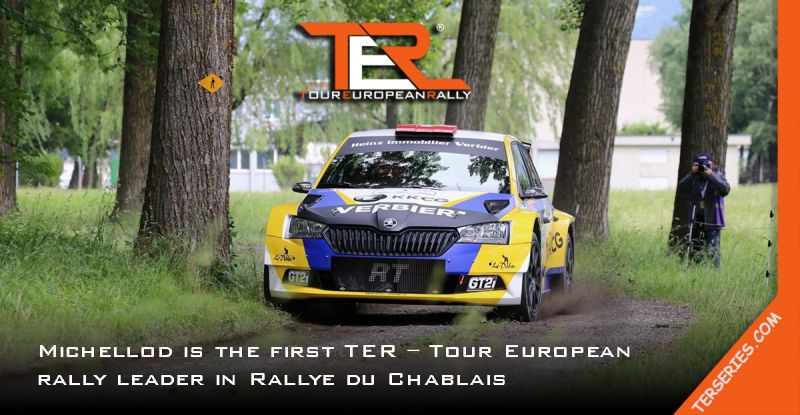 Jonathan Michellod and Stéphane Fellay (Škoda Fabia) lead the TER – Tour European Rally standings in Rallye du Chablais after the opening loop of stages. On the fast roads of the Swiss Alps, they won the first test by a mere 0.2” over multiple event winners Sébastien Carron and Lucien Revaz’s sister car, then increased the gap in the second stage, where 2-time Swiss Champion Ivan Ballinari, codriven by Marco Menchini on VW Polo, climbed on the final step of the podium. Cédric Althaus and Gaëtan Lathion’s Škoda Fabia is fourth, ahead of 2021 Swiss Champion Mike Coppens, codriven by Renaud Jamoul on a Citroën C3.

In the TER Junior, Sacha Althaus with Lisiane Zbinden (Renault Clio Rally 4) set off from where they had ended last year, claiming top spot from the beginning, ahead of the Peugeot 208 Rally 4 of
Thibault Maret codriven by Andy Malfoy. The Rally 5 Clios of Guillaume Girolamo - Benjamin Betrisey and Yoan Loeffler (with Gaëtan Aubry) are third and fourth.

Joël Rappaz and Kevin Bronner’s VW Polo retired in SS2, after the newly-formed crew had set the third fastest time in the opening test.