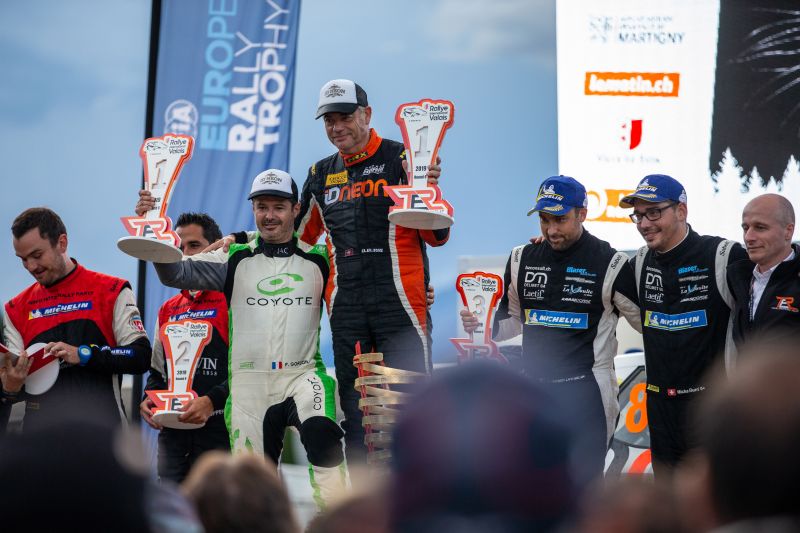 Three crews entered in the TER – Tour European Rally occupy the 3 first place of the series and are onthefinal podium of the 60th Rallye International du Valais.
Olivier Burri codriven by the French Fabrice Gordon on Skoda Fabia R5, win the 6th round of the 2019 TER - Tour European Rally and the 60th Rallye International du Valais. The crew managed the racing during the 3 days of the event with a masterful hand leaving no chance to their direct pursuers on the rainy and dry routes of the Valaisian Region.
By finishing at the 5th place of the TER overall classification the Luxemburger Steve Fernandes codriven by Olivier Beck on Skoda Fabia R5 are crowned 2019 TER – Tour European Rally Champions.

The Belgians Joachim Wagemans and François Geerlandt after an exceptional performance during the event on Valaisian routes are at the 4th position in the TER – Tour European Rally. Joachim Wagemans driving the Skoda Fabia R5 in the TER official livery. They are following by a Swiss crew Jean-Marc Salomon codriven by David Comment on a Ford Fiesta R5 and the Skoda Fabia of the German crew, Stefan Gottïg and Natalie Solbach-Schmidt, 2019 TER – Tour European Rally.

In the TER 2WD TROPHY, the Romanian 2019 champion of the series, Alexandru Filip and Gabriel Lazar on Renault Clio R3T Max finished in second position behind the Swiss Thomas Schmid and Quentin Marchand with a Renault Clio R3T.

In the TER 2CUP, the Swiss crew, Jonathan Michellod codriven by Stéphane Fellay with a Peugeot 208 R2 are the 2019 champion of the series and winners of this one in the 60th Rallye International du Valais.

Today, following an accident in the 12th special stage of the day, retirement for the Swiss crew, Ivan Ballinari and Giusva Pagani on Skoda Fabia R5 while they occupy  the 3rd position in the TER rankings and 60th Rallye International du Valais.