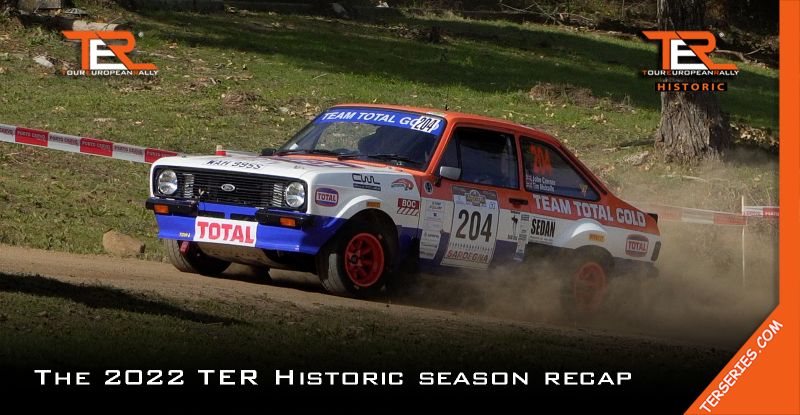 Metcalfe and “Mesziati” in title fight until the final round.

The 2022 TER Historic provided great sporting action; starting from Italy, across to France then upwards to Switzerland, and the new entries of Get Connected Rali Ceredigion in Wales and Rally Terra Sarda, on the beautiful Mediterranean island of Sardinia. The title fight was only settled at the finish podium of the season finale.

In the opening round in Tuscany, featuring the technical former WRC gravel roads around Sansepolcro, Anghiari and Pieve Santo Stefano, Hungarian “Mésziati” took the first season win at Rally Terra Valle del Tevere, after commanding from start to finish.

The demanding world class alpine stages across the mountains overlooking the French Riviera were on the menu of Rallye Antibes Côte d’Azur. And one man’s meat was another man’s poison, as Tim Metcalfe secured victory while his title rival had to stop almost within sight of the finish.

The next scheduled round, Rally Georgia, was postponed to the 2023 season in agreement with the Georgian Automobile Sport Federation, in light of the difficult international situation, to protect the safety and in the interest of all the stakeholders.

The battle for the title went down to the wire, in an exciting decider round with everything to play for.

A new entry in the TER Historic calendar, Rally Terra Sarda provided the perfect setting for the season finale, over the technical tarmac stages embracing the north of the beautiful Mediterranean island of Sardinia: The Gallura and Costa Smeralda regions, and world famous Porto Cervo, were a stunning backdrop for some great sporting action.

At the Rally Terra Sarda finish podium, on the stunning Porto Cervo marina, there was more than a second season’s win to celebrate for Tim Metcalfe: the British driver clinched his second TER Historic championship after his maiden win in 2020, ahead of his rival “Mésziati” who ended in the runner-up spot in the event and in the TER Historic Standings after a season long battle.

The 2022 TER Season also saw several Promo Events: Arctic Lapland Rally (Finland) is once again the season opener, joined by new entries Rally of Nations Guanajuato (Mexico), former round of the World Championship, and Rally Montre (Japan) valid for the APRC and the Japanese Championship. All these events enjoy the same global promotion as the TER Series rounds.