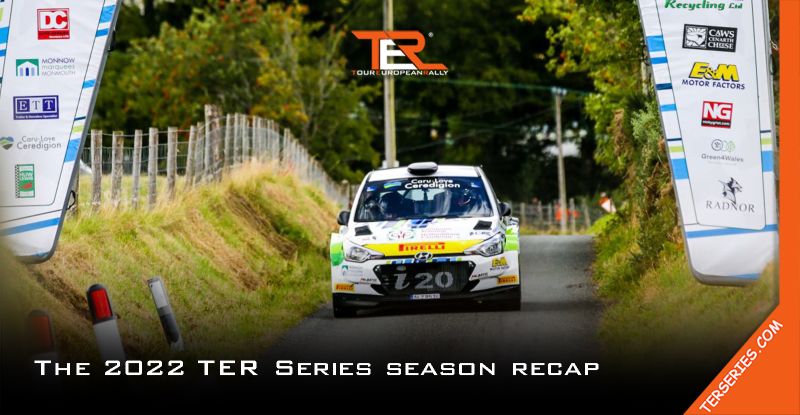 A Paddon-Ballinari fight for the championship down to the wire.

The 2022 TER – Tour European Rally season offered a season-long duel for the title, which only ended at the last stage of the final event.

Young Italian rising star Alberto Battistolli was the first series leader after winning the opening round of Rally Terra Valle del Tevere, on Tuscany’s technical and former WRC gravel roads around Sansepolcro, Anghiari and Pieve Santo Stefano, where he lead from start to finish.

Four time French tarmac Champion Yoann Bonato took his maiden win in Rallye Antibes Côte d’Azur. The fastest time in the TER Power Stage, and the bonus points thereby awarded, allowed him to climb into the championship lead, after two days of great sporting battles over the world class alpine stages across the mountains overlooking the French Riviera.

Across the Alps to Switzerland and some great challenging mountain roads for Rallye du Chablais. 2019 TER Junior Champion Jonathan Michellod secured his first victory after being in front from the first to the last stage. Michellod’s Team mate, 2-time Swiss Champion Ivan Ballinari began his season with a third place.

Another short hop into Italy and a totally different background: Rally di Alba and the technical stages of the Langhe Roero Monferrato hills, UNESCO World Heritage site. Hayden Paddon, TER Ambassador, Hyundai New Zealand driver, former Hyundai Motorsport WRC works driver and winner of 2016 WRC Rally Argentina made the most of the variable conditions and won, leading from start to finish. Ivan Ballinari was only fourth after a puncture. The same issue struck his team mate Jonathan Michellod, who finished seventh but managed to take the series lead.

The next scheduled round, Rally Georgia, was postponed to the 2023 season in agreement with the Georgian Automobile Sport Federation, in light of the difficult international situation, to protect the safety and in the interest of all the stakeholders.

Round 5 was therefore another new entry to the newest concept of Rally series: Get Connected Rali Ceredigion, the only closed road rally in Wales, saw Hayden Paddon set all the fastest times, in the spectacular scenery of the Cambrian Mountains, and clinch his second consecutive win, after Rally di Alba. Paddon reduced the gap in the provisional standings from the new series leader, Ivan Ballinari, who secured silver at the finish on the picturesque Aberystwyth seafront, after two days of action on the challenging Welsh tarmac stages. The battle for the title was settled in the final round, which still offered some twists.

Yet another new entry in the TER – Tour European Rally calendar, Rally Terra Sarda provided the perfect setting for the season finale, over the technical tarmac stages embracing the north of the beautiful Mediterranean island of Sardinia: the Gallura and Costa Smeralda regions, and world famous Porto Cervo, were a stunning backdrop for some great sporting action. Mid-day through the final leg, with five stages remaining and after the Power Stage bonus points had been awarded, Paddon and Ballinari were even on points, joint atop the standings.

At the Rally Terra Sarda finish podium, on the stunning Porto Cervo marina, TER Ambassador Hayden Paddon scored a hat trick of victories (after Alba and Ceredigion) to secure a second season title, after clinching a record sixth NZRC crown. 2-Time Swiss Champion Ivan Ballinari finished second in the event and in the TER Standings after a season long battle.

The 2022 TER Season also saw several Promo Events: Arctic Lapland Rally (Finland) is once again the season opener, joined by new entries Rally of Nations Guanajuato (Mexico), former round of the World Championship, and Rally Montre (Japan) valid for the APRC and the Japanese Championship. All these events enjoy the same global promotion as the TER Series rounds.