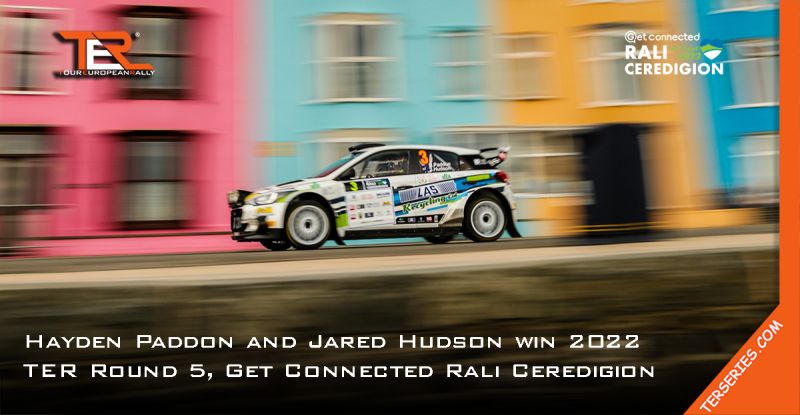 Ballinari takes silver on the picturesque Aberystwyth seafront and is the new series leader.

TER Ambassador Hayden Paddon, codriven by Jared Hudson on a Hyundai i20 R5, took a convincing victory in the fifth round of the 2022 TER – Tour European Rally, after two days of action on the challenging tarmac stages of the only closed road rally in Wales

Paddon led from start to finish, setting all the fastest times, in the spectacular scenery of the Cambrian Mountains. The former Hyundai Motorsport WRC works driver, winner of 2016 WRC Rally Argentina, made the most of his second tarmac event with the Korean manufacturer’s R5 car to take a second consecutive win after Rally di Alba and closing the gap in the overall standings of the newest concept of Rally series, before the final round in Rally Terra Sarda.

The Swiss crew of Ivan Ballinari and Marco Menchini, driving a Volkswagen Polo GTI R5, finished in second position after battling throughout Saturday with the sister car of Jason Pritchard and Phil Clarke. The two crews traded places and seconds in a close combat during the night stages, but the turning point happened on SS5 as Pritchard crashed and retired, leaving the 2-time Swiss Champion, safe in second place with valuable points, take the series lead and keep the title fight open.