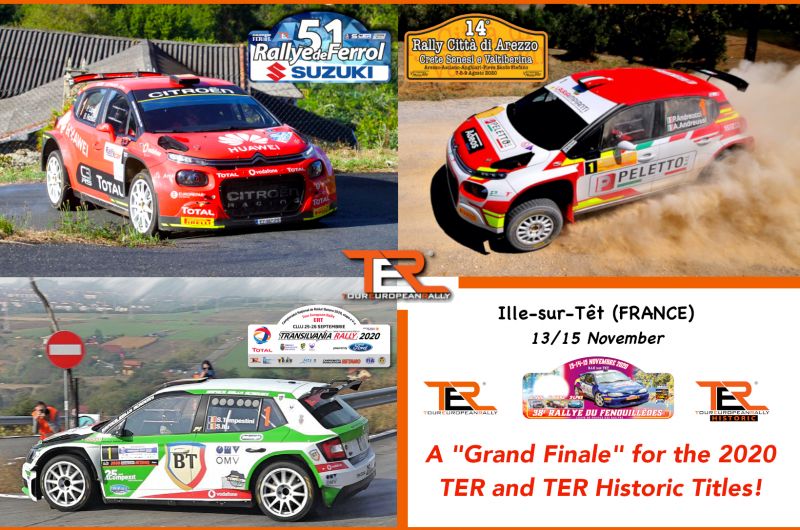 A new “Grand Finale” for the 2020 Tour European Rally… the fight for the title is open!

After the Rallye Antibes Cote d’Azur cancellation due the tempest Alex, a new event in France join the 2020 TER and TER Historic.

With 35 points at stake for the best TER driver in the last round of the 2020 Tour European Rally, the 38th Rallye du Fenouillèdes from November 13th to 15th, the fight for the 2020 overall title is open to 14 drivers.

Another favourite is spanish Luis Villariño, currently at 28 points, with his 3rd participation in the 2020 TER at  Ille-sur-Têt he could also bag 3 bonus points as per the TER regulations.

Italians Tullio Versace, Stefano Marrini and Massimo Squarcialupi, romanian Dan Girtofan and spain's Ivan Ares and Alberto Monarri are also very close to the leaders and ready to seek success in the 2020 TER.

Many drivers still stand a mathematical chance in the final battle.

The battle also extends to the TER Junior, the series dedicated to under 26 year old drivers  with RC4 R2/Rally4 cars.

6 drivers can challenge for the title:

4 drivers can compete for the title of TER Production/RGT/R4-K:

In the TER 2wd Championship, spanish Edgar Vigo leads with 48 points ahead of romanian Alexandru Filip, previous category winner in 2018 and 2019, currently at 40.

Jorge Cagiao, Nikola Mishev and Alex Raschi with 30 points are also in fight for the victory, while Italian Luigi Caneschi, argentinian Emiliano Biondi and spanish Antonio Otero still stand a chance too.

In TER Historic pre-81 Championship the fight for the title is between the 2 Ford Escort of spanish Francisco Lopez and british Tim Metcalfe.

A “Grand Finale” for the 2020 Tour European Rally titles!