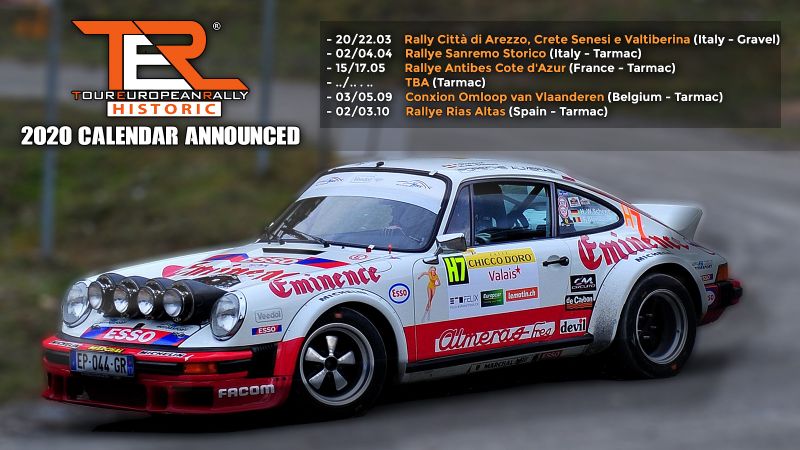 Six rounds across Europe with great events in prestigious locations.

The promoters of Tour European Rally Historic have announced the new 6-event calendar of an innovative concept of Historic Rally series.

The six events 2nd season of  TER Historic will begin with Rally Città di Arezzo, Crete Senesi e Valtiberina in Tuscany, on the gravel roads that are part of the history of Rallying, from back when Rallye Sanremo was in WRC.
Rallye Sanremo Storico, will be the 2nd round of the season, on the legendary former world rally championship stages of the Italian Riviera.
From there, TER Historic will travel across Europe: it will be in Provence/Cote d’Azur with one of the best Rally in the continent, the Rallye Antibes Cote d’Azur, on the historical special stages of Rallye Montecarlo; the 4th round of 2020 TER starts in a fantastic location in central Europe will be announced in next days; again in Flanders region, with the unique roads of Conxion Omloop van Vlaanderen  the “Tour of Flanders”  in Roeselare at start of September; to end in  Galicia, in the fantastic scenery of A Coruna, where TER Historic drivers can compete in the tricky typical roads of the region.